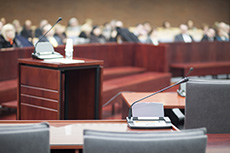 Criteria for Judgement to Suspend a Sentence

A judge considers the degree of illegality of the conduct and seriousness of responsibility case by case in order to determine to what extent penalty should be reasonable, and hands down sentence within the range of statutory penalty on the premise of various circumstances about the person who has committed a crime. Through this process, a judge evaluates whether suspend a sentence or not.

Whether one can gain suspended sentence in a case which is not clearly suitable for suspension of execution of the sentence depends on the capacity of a lawyer to persuasively make a plea for the circumstances.

A judge determines whether hands down suspended sentence or not considering comprehensively the factors mentioned above. In a case of a serious crime such as murder there is little likelihood to achieve suspended sentence. Moreover, if one has many previous convictions of the same kind of crimes, it is extremely hard to avoid a sentence without stay of execution. However, it is important to assert the circumstances in favor of the accused among the factors accurately and persuasively, because he/she could achieve pardon even though the accused did not obtain suspended sentence.

Especially, in a case of a crime with the victim, the out-of-court settlement has a great impact on pardon. Cooperation from the family of the accused is also important in order to show that the environment to rehabilitate in a society is created.

To assert these circumstances in favor of the accused has a great impact on achieving suspended sentence. Whether a judge considers the extenuating circumstances and hands down lenient judgement depends on how one carries out persuasive defense activities.

The Act for Partial Revision of the Penal Code was passed in 2014 and the system of suspension of execution of a part of the sentence was established. The act is to become effective by June of 2016.

This system sets the suspended term of not less than 1 year but not more than 5 years, and suspends execution of a part of the sentence.

The purpose of the system is to encourage to live in a society without committing a crime during the suspended term after completed the part of sentence without stay of execution by suspending execution of a part of imprisonment with/without work, and to design the linkage between the on-side treatment and the out-side treatment. In a case of short-term sentence without stay of execution, the system may be something to deal with the situation that it is difficult to ensure enough parole term.

Second Suspension of Execution of the Sentence

When one committed a crime during suspended term, he/she in principle is to be get a prison sentence. However, exceptionally the sentence may be suspended again. Legally, one may achieve suspended sentence again, where the following three conditions are fulfilled, (1) sentenced to imprisonment with/without work of less than 1 year; (2) there are special extenuating circumstances; and, (3) out of the period of probation.

Even when committed a crime during suspended term, do not let it go but please come to our firm to consult with our lawyers who excel at achieving suspended sentence.