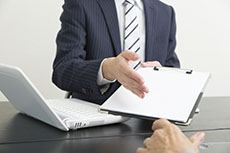 According to the Supreme Court’s Judgement on McLean of 4 October 1978, basic human rights guaranteed in the Constitution don’t include the right of foreigners to reside in Japan. Though foreigners can enjoy human rights guaranteed in the Constitution, the right to reside in Japan and to re-entry to Japan are to be at the discretion of the Minister of Justice as human rights are the right as the citizens as premise for the state. Moreover, the Immigration Control and Refugee Recognition Act establishes the system of deportation procedure. When a foreigner commits a crime in Japan, the Act applies to the foreigner and he or she might be ordered to leave Japan. In other word, the right of foreigners to reside in Japan is granted as long as they meet compliance requirement in the Act. The Act provides that “a person who has been sentenced on or after November 1, 1951, to imprisonment with or without work or imprisonment for life or for a period of not less than 1 year. However, this shall not apply to those who have been found guilty with suspension of execution of sentence.” as a ground of deportation (Art. 24(ⅳ)(i) of the Act).

The Act also separately provides the grounds of deportation for foreigners with a status of residence listed in the left-hand column of Appended Table I (Art. 24(ⅳ)-2 of the Act). A foreigner with this status of residence who has been sentenced to imprisonment with or without work on the charge of a crime: braking into a residence; counterfeiting of a document; injury; theft; robbery; fraud; breach of trust; extortion, etc. might be deported. For example, the statutory penalty of injury is imprisonment with work for not more than 15 years or a fine of not more than 500,000 yen, so you might not be deported if you sentenced to a fine; however, you are likely to be subject to deportation if you faced conviction even on probation.

Besides, deportation procedure may be initiated against even a permanent resident foreigner in accordance with Art.

As seen above, foreigners could be subject to deportation in case where they got involved in a criminal case. Therefore, it is of considerable significance to increase a possibility to gain non-prosecution, summary order, and suspended sentence by asking a lawyer to speak defense of them from the early stage of arrest.

II. Extension of Period of Stay

III. Revocation of Status of Residence

The procedure for revocation is set in Art. 22-4 of the Act. Basically, the status is revoked when a foreigner made fake entry in applying for visa or failed to submit notification of residence. Criminal conducts committed in Japan don’t trigger revocation.

One of the requirement of application for permanent resident status and naturalization is “behavior and conduct must be good”. This means that it is required that an applicant should comply with the laws in Japan and make a life not socially criticized as a resident in Japan. While this requirement includes not only with or without criminal records but various factors, the fact that the applicant had committed a crime could affect the requirement. For that reason, if you are considering an application for permanent resident status and naturalization, it’s very important to minimize the criminal punishment.

AICHI Criminal Cases Law Firm has lots of criminal lawyers. Our lawyers get involved in your case right after arrest and conduct the defense considering an issue of resident status.